The others within ourselves.
As with accessories, familiars are not separate entities from the esk but are actually a part of their being. Think of them as imaginary friends or internal voices that have materialized as part of the esk's form. Despite this, esk can build relationships with their familiars as individuals; they will get to know their familiars as part of the process of getting to know themselves. Familiars follow the same rules as nature features, they are part of the spirit form and are able to take physical form or become ethereal or invisible. They do not age or die, they are not actual organisms and have no need to feed or carry out normal animal behaviors. They are a spirit companion to your esk and can have a fully fleshed out personality, understanding the relationship between esk and familiars is open to creative interpretation.

Familiars are tied to the biome.
Familiars must be appropriate for the esk's home biome. Species should be selected based on where they are realistically found on Earth and what types of habitats they would typically live in. Please make thoughtful choices when selecting species for your esk.

Familiars are also energetically tied to the biome and they will vanish when an esk is roaming in other biomes. How a familiar is affected during the transition to other regions or in the overlapping areas is open to creative interpretation.
Limitations on familiars
Swarms: the hive mind.
Esk can also manifest swarms of familiars large or small. Swarms operate as a single familiar with a single personality like a hive mind. The esk can only summon the swarm in a group (3 or more), never individually. Esk are still able to have multiple individual familiars of the same type or species, but they will not be a swarm if they do not operate as a hive mind. Individual familiars each have their own personality while swarms are a single personality comprised of multiple parts.

Applying an enchantment.
If your esk has a familiar you may apply an enchantment to it in order to give it magical properties. This can give the familiar a mystical appearance and allows it to have a magical effect or ability.
​Mutations cannot be applied to familiars.
New: A shared identity.
Since familiars are a part of an esk's being, they can manifest with a special identifier that connects them to their esk. This identifier can either be a single small nature feature or transformation reward.

The esk must have the nature feature or transformation reward in order for it to be used as an identifier on a familiar. For nature features, the species must be exactly the same, but the same species can be repeated across familiars. For transformation rewards, the item must be one earned by the esk, and does not repeat — for example, if the esk has only earned one crystal, then only one familiar can have a crystal.

Each familiar can only have one identifier each — they cannot have both a nature feature and a transformation reward. 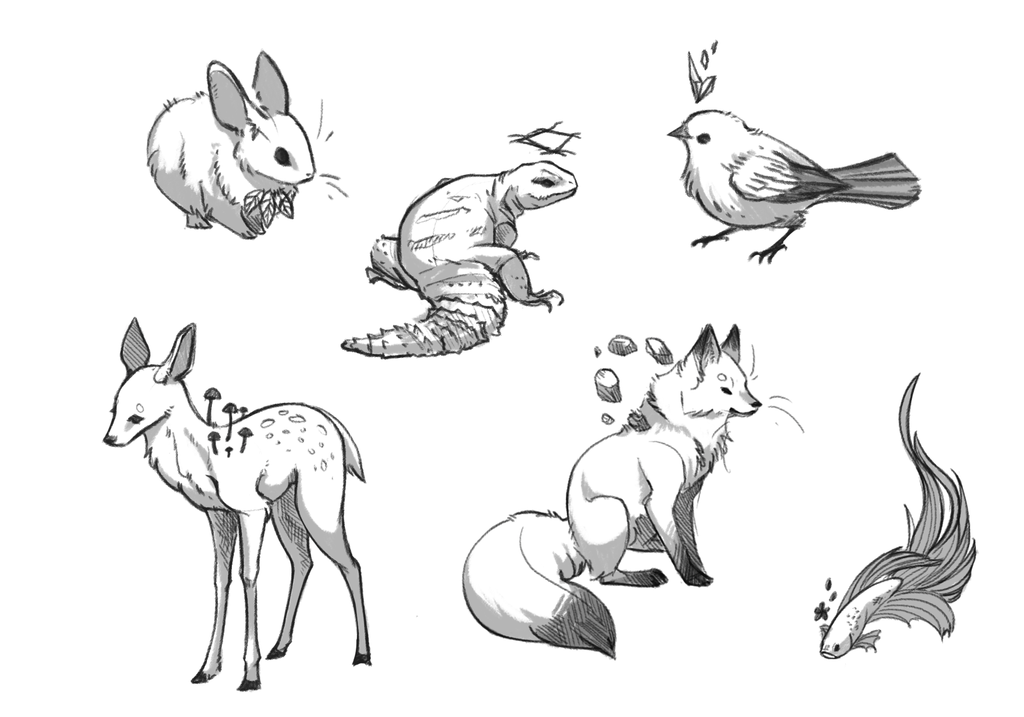